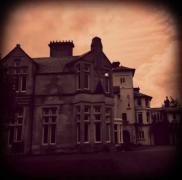 The land at Stephens house and garden dates back to the knights Templar, later king Henry VIII would have a claim to it as well.
This historic building was actually lived in by Henry “inky” Stephens, previously a surgeon, who then created the famous blue ink, making him somewhat of a Victorian celebrity! The building was ravished by fire in the 1980s and was rebuilt to hold and retain as much of the original fixtures and theme.

This house was also used as a hospital and look out point during both world wars, the basement being used as a morgue for many years. The land itself dates back to the knights Templars and was once owned by king Henry! Also used in ww1 with the basement lending itself as a morgue & in ww2 as a look out post. So many different energies exist here and our stories here are countless... it simply is one of the best places we have the privilege to investigate!

Become a paranormal investigator this Halloween  with our friendly and experienced team who will train you up with all of our equipment and techniques in a workshop, guide you through varied structured vigils throughout the location over the night and give you allocated time to explore and investigate the building and the grounds on your own and with friends, giving you the opportunity to hold your own vigils and experiments with our vast range of paranormal equipment!